So far I have not seen an Icom 7610 Fldigi RigCAT file. I modified an IC-7600 file and it works. So, if you’d like to try Fldgi the easy way with the Icom 7610, have a look. Otherwise, I have another article using ACLog and Fldigi which also works very well. Fldigi can be used with some simple macros and it’s easy to send personalized messages. The Icom 7300 is very similar.

In case you’re wondering, they already have an .xml file for the Icom 7300.

The easiest way I have found to use Fldigi is with RigCAT and using the log in Fldigi. I can import the Fldigi log into my favorite logbook later. 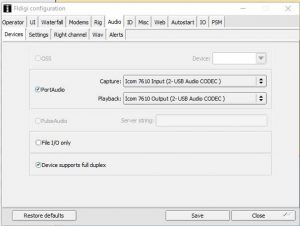 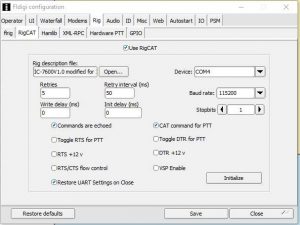 I like using Fldigi for PSK31 and the default macros are a good start. I edited them just a bit to suit my needs and station. A lot of Hams like to have a “RST/QTH” macro and “Brag” macro to send just so they don’t have to type those things over and over. That’s my preference too.

I normally use a QSO start and QSO end (KN) macro during the contact. My personalized message is typed in between those two macros. Have a look at the video below and I make an unexpected DX contact on PSK31 using 30 watts. Who said propagation is poor, HI!

In this video I’ll go over two of the important Fldigi configure tabs, my output power, macros and some receiver settings. Don’t forget to see my Icom 7610 Screen Captures page for more internal settings on the Icom 7610.

Coming up next I’ll have a video and closer look at the Elk antenna along with a look at satellite tracking software.